Located in a historic movie theater, this local brewery has a great lineup of local food trucks

At the corner of Martin Luther King Jr. Boulevard and Broad Street, nestled prominently amongst the fairy lights and the beer bus, is Zony Mash: a brewery in a historic building that is becoming a cultural hub in Central City. The ample outdoor space has provided a much-needed lifeline for established as well as brand-new food pop-ups in the area, and also hosts performances by local musicians. And in these socially distant times, a large beer garden and equally spacious interior are just what COVID-conscious consumers are seeking. 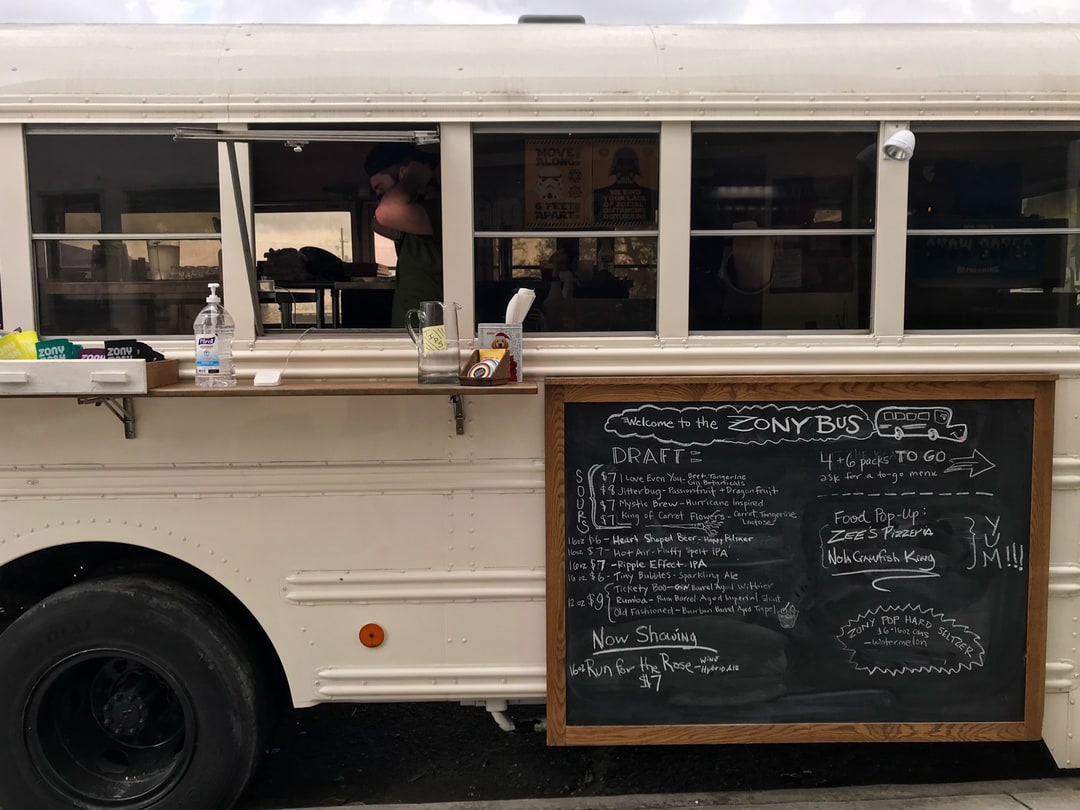 Zony Mash opened in the building that was once the Gem Theater in late 2019—a time frame for starting a new business that will strike any present-day reader as some sort of cosmic joke. Owner Adam Ritter and his wife Jennifer are seasoned bar owners and craft beer aficionados from Philadelphia. Ritter had had an early love affair with New Orleans in his youth and by 2017 the couple was ready for a “change of pace”— they sold their Philly businesses and came South.

The former Gem Theater has a fascinating history in its own right: it was built in 1947 as a place for Black residents of the Broadmoor neighborhood to watch movies and live entertainment without the degrading experience of attending segregated theaters, where they were usually required to enter through side doors and offered inferior amenities. It and the Carver Theater on Orleans Ave. are the only two local surviving African American theaters from this era. The theater closed in 1960 and later that year it was bought by radio station WBOK, who owned it for a short time before it ultimately became a storage warehouse for a nearby auto-parts shop. It narrowly avoided demolition in 2011 when it was designated a city landmark by the New Orleans Historic District Landmarks Commission, and in 2015 it was added to the National Register of Historic Places. 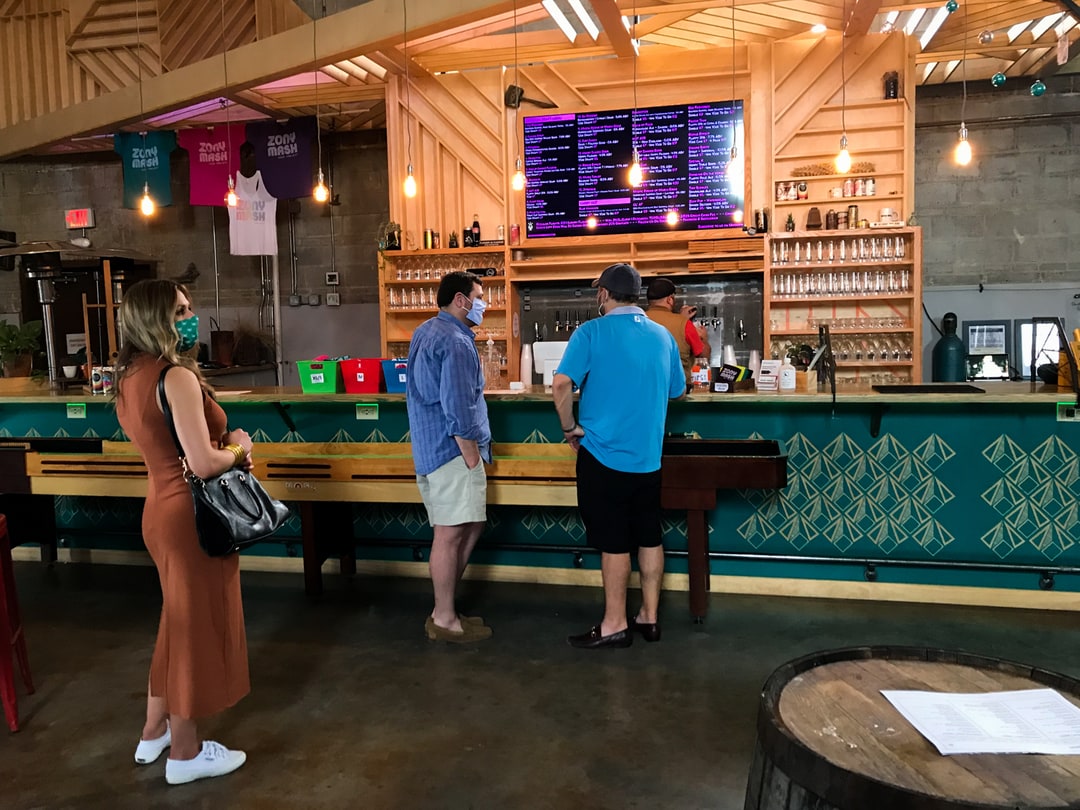 In more recent history, the building had a nearly-two-year stint as a brewery/taproom called Wayward Owl from 2016 to 2018. As such, a lot of the brewery infrastructure was already in place, but Adam saw ways to improve upon the concept.

“We wear this building like a badge,” Ritter said. “Twenty to 30,000 cars go by on Broad every day. We want to give them a reason to stop by.”

After a night of sampling the product and staring at the back wall with a friend, that friend had designed the beautiful geometric woodwork on the wall that doubles to dampen the noise in the large echo-prone space. They extended the taproom seating area deep into the brewery zone to accommodate more guests and allow them to get up close and personal to the brewing action, and groomed the outdoor space to make it all the more inviting. The former fan rooms in the ‘turrets’ on either side of the indoor stage (components of the original air conditioning system) were converted to an office and the mill room, where they mill the grain for their beer. 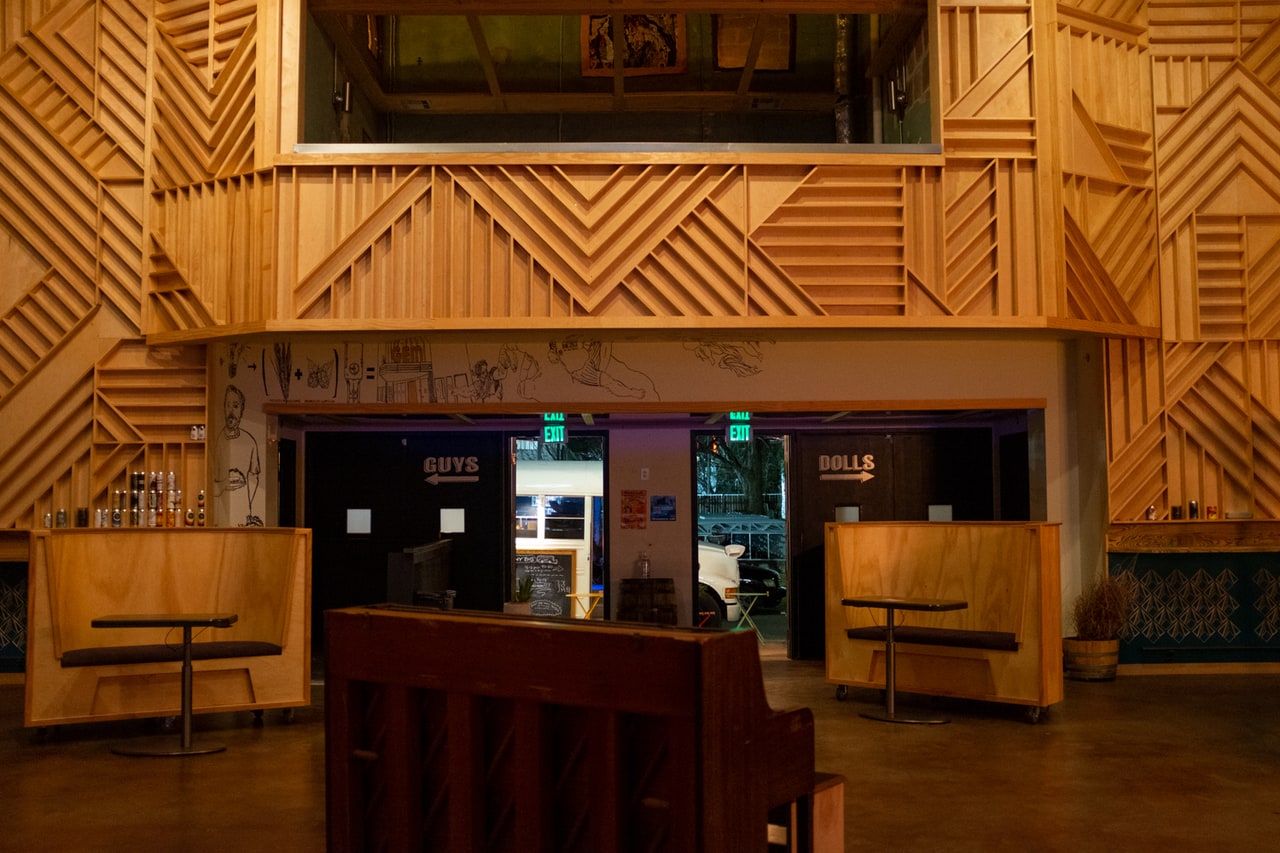 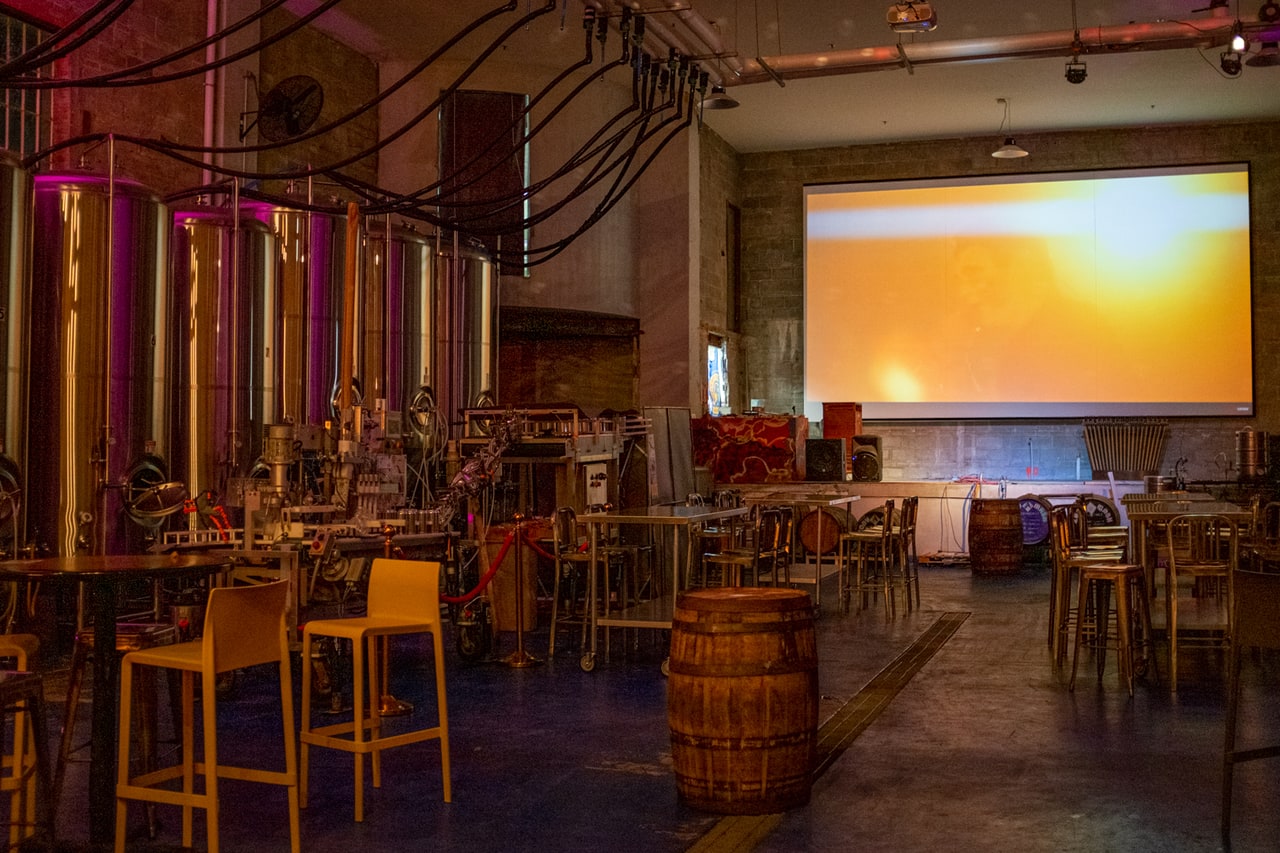 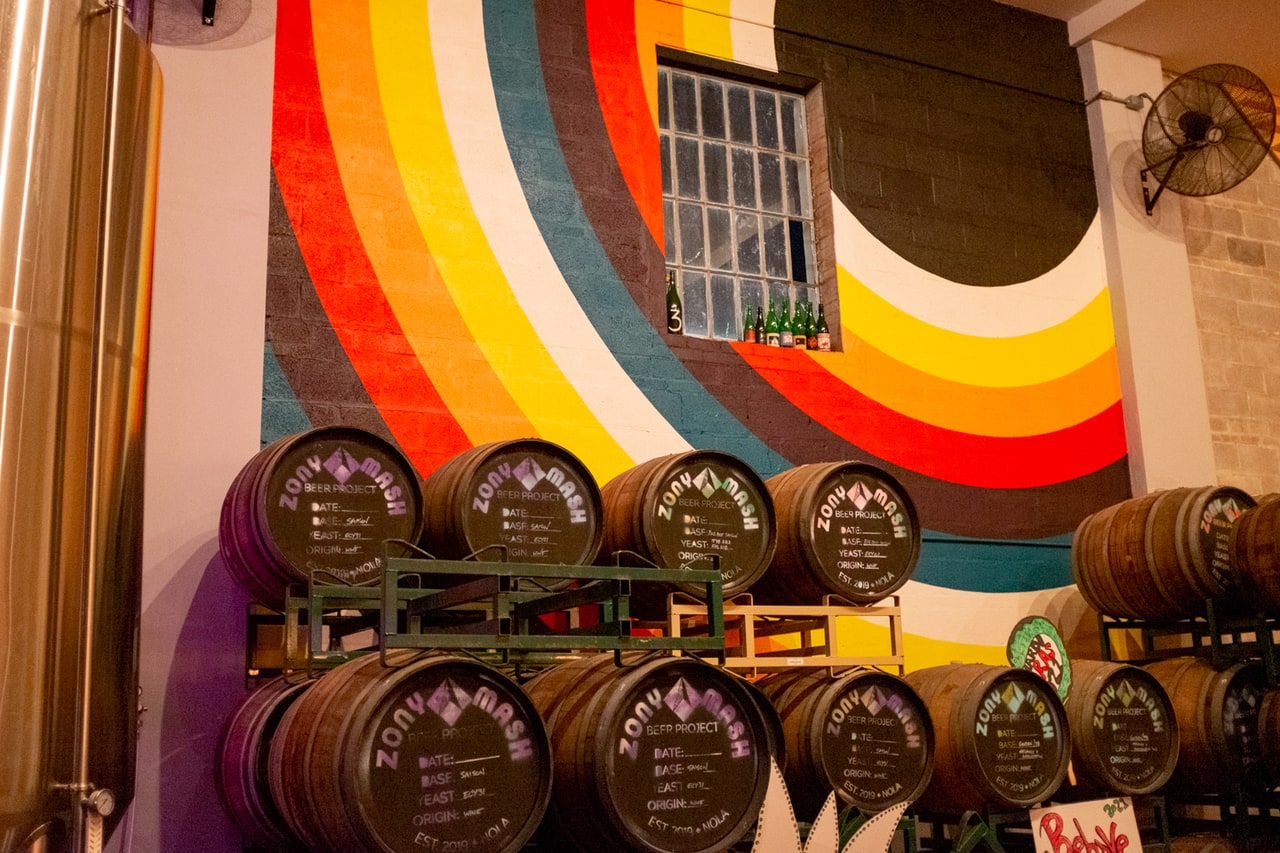 What’s in a name?

Because you’re sure to be curious, the name Zony Mash is a nod to a Meters tune that appeared on an album of unreleased and rare songs that came out in the ‘90s. This quintessential New Orleans band struck Adam as the perfect group to pay tribute to with his establishment.

“They left an indelible mark on the music scene! They created a whole genre: Swamp Funk,” Ritter said.

To say the beer offerings at Zony Mash are impressive is an understatement. On any given day, the establishment has nearly 50 different brews to sample, in eye-catching cans with quirky names and innovative ingredients. There’s “Hot Air” (a fluffy spelt IPA), “S’More Booty” (an Imperial stout with graham cracker and marshmallow flavors), and one of my favorites, as a bleeding-heart Neutral Milk Hotel fan: “King of Carrot Flowers” (a sour with carrot, tangerine, and mango flavors). Ritter’s current favorite is another sour (this one with beet, tangerine, and gin botanical flavors) called “I Love… Even You,” named after the truly unconditional words of affection he received from his now-10-year-old son a few years ago.

Mitch Grittman is the brains behind the beers: a food scientist who also develops for Smoothie King, and with whom Adam says he has a very functional business relationship. “He has his sphere and I have mine. We meet in the middle, don’t step on each others’ toes, and there are never too many cooks in the kitchen.”

But there are plenty of (literal!) cooks in rotation. When coming up with the Zony Mash concept, having an in-house kitchen was the last thing the owners wanted to deal with. Luckily, their spacious outdoor beer garden serves as a perfect food truck venue. It became all the more perfect when Zony Mash came into the possession of their own trailers, and even an industrial pizza oven, for novice vendors to make use of. 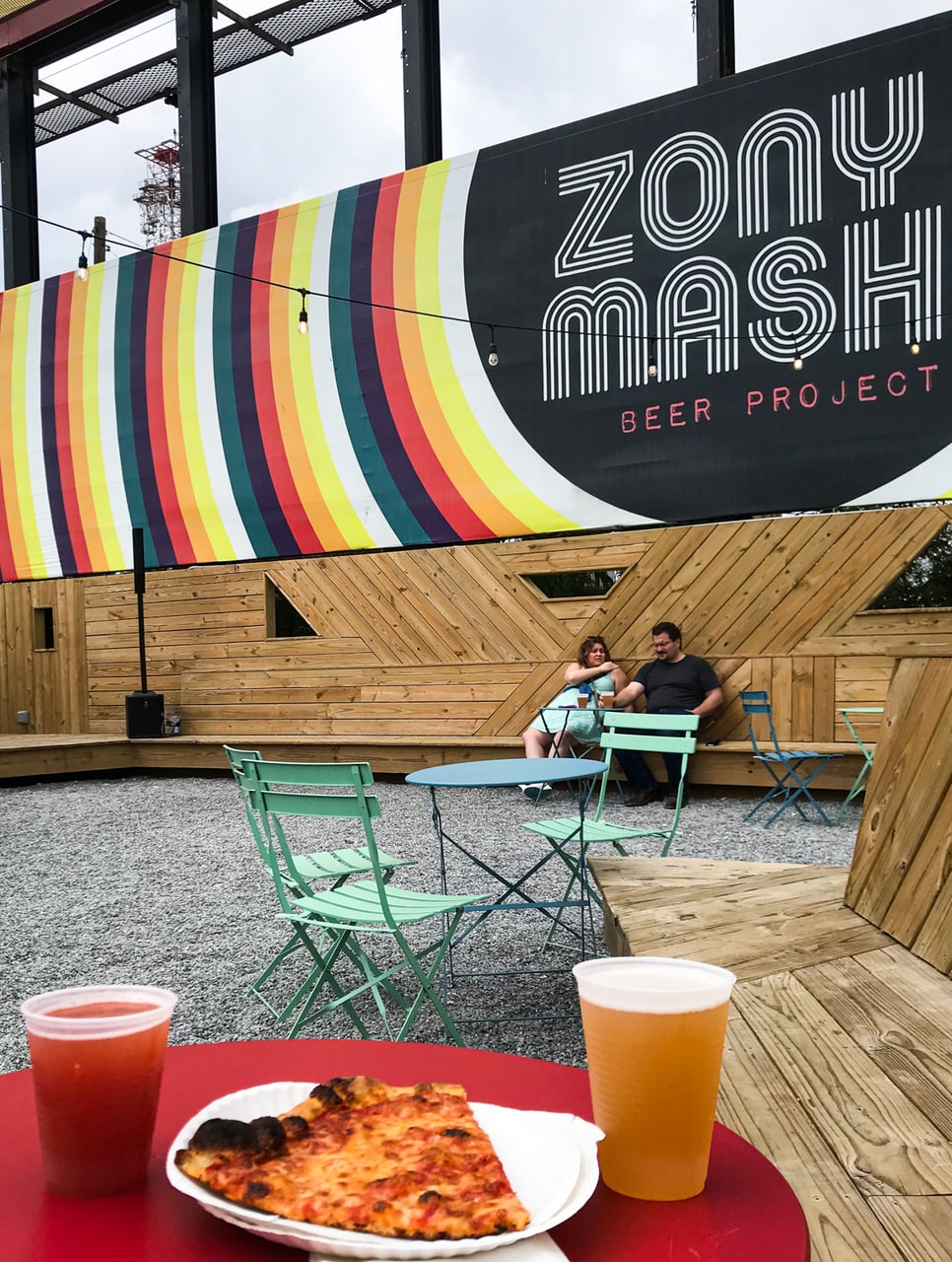 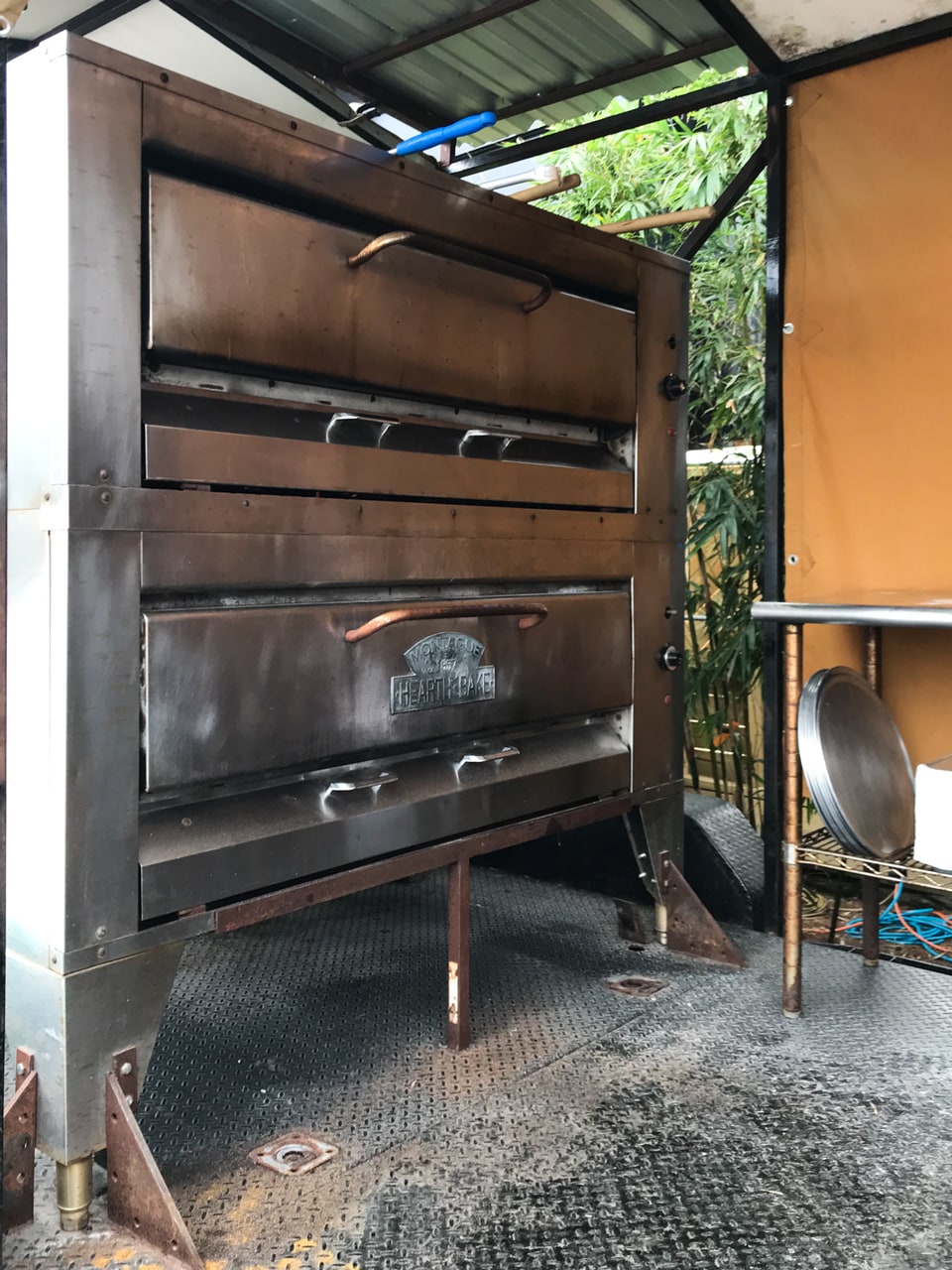 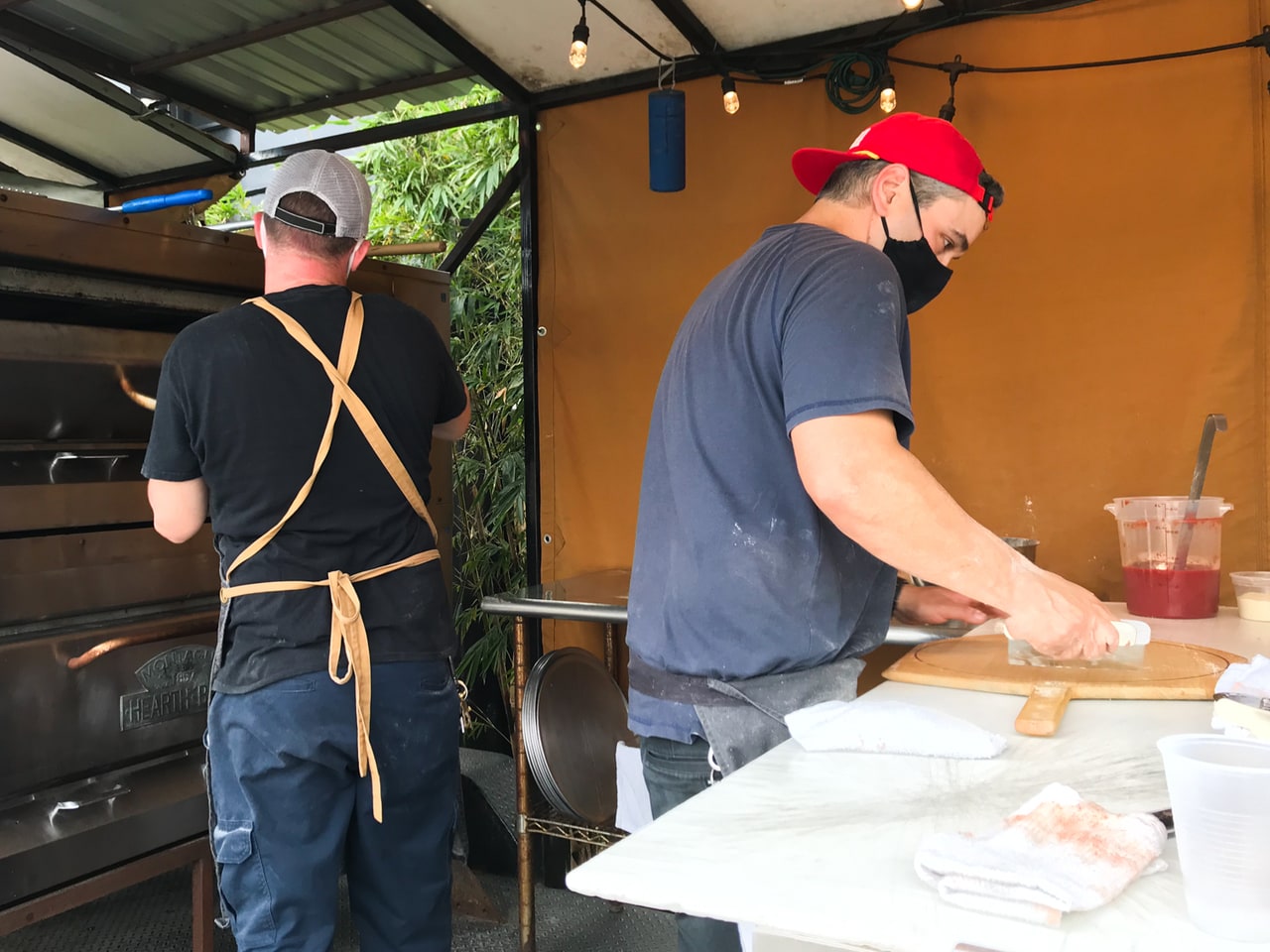 “It really just made sense,” Ritter said. “We’ve got the space, and there are so many new businesses who just aren’t in a position where they can or want to do the brick-and-mortar thing yet.” As such, a very symbiotic relationship has emerged between the brewery and a number of local vendors who bring a wide variety of dining options to the lot.

There are currently six regular pop-ups that come through the Zony Mash lot on a weekly basis: 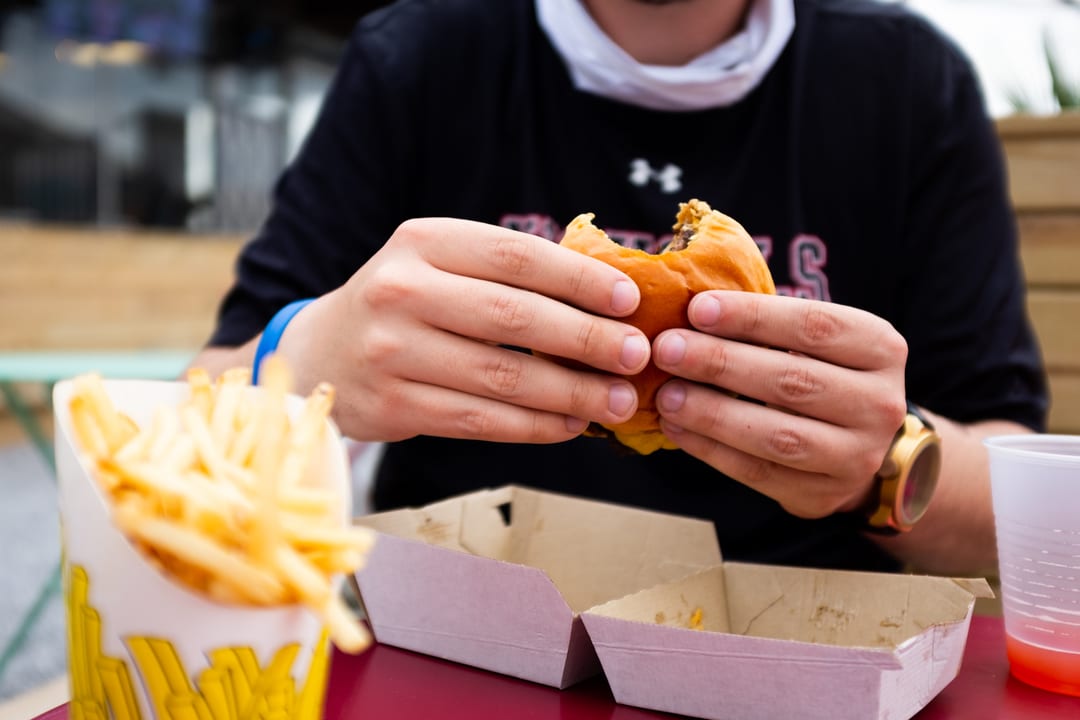 Bub’s Burgers was the first food operation to team up with Zony Mash after the pandemic hit, shortly after their own first-ever pop-up at Mid City Pizza in June 2020. The idea for the pop-up began following the death of Rand Owens, the former owner of Mid City Pizza/Banks Street Bar (and so-called “Mayor of Mid City”) in late February 2020. Josh Richard and his brother Ron, along with friends Tristan Moreau, Peter Prevot, and Aaron Amadio, were friends of Owens’. They loved burgers, and were out of work due to lockdown restrictions. Starting the pop-up in their friend’s honor (“Bub” was his preferred term of endearment; any similarity between their name and that of a popular cartoon is purely coincidental) seemed perfectly logical. Bub’s is currently the Friday night staple at Zony Mash, where they offer a few delectable variations of their signature smash burger, including some Impossible options for the non-meat eaters.

MORE: If you love Mid City Pizza, you need to meet Bub’s Burgers 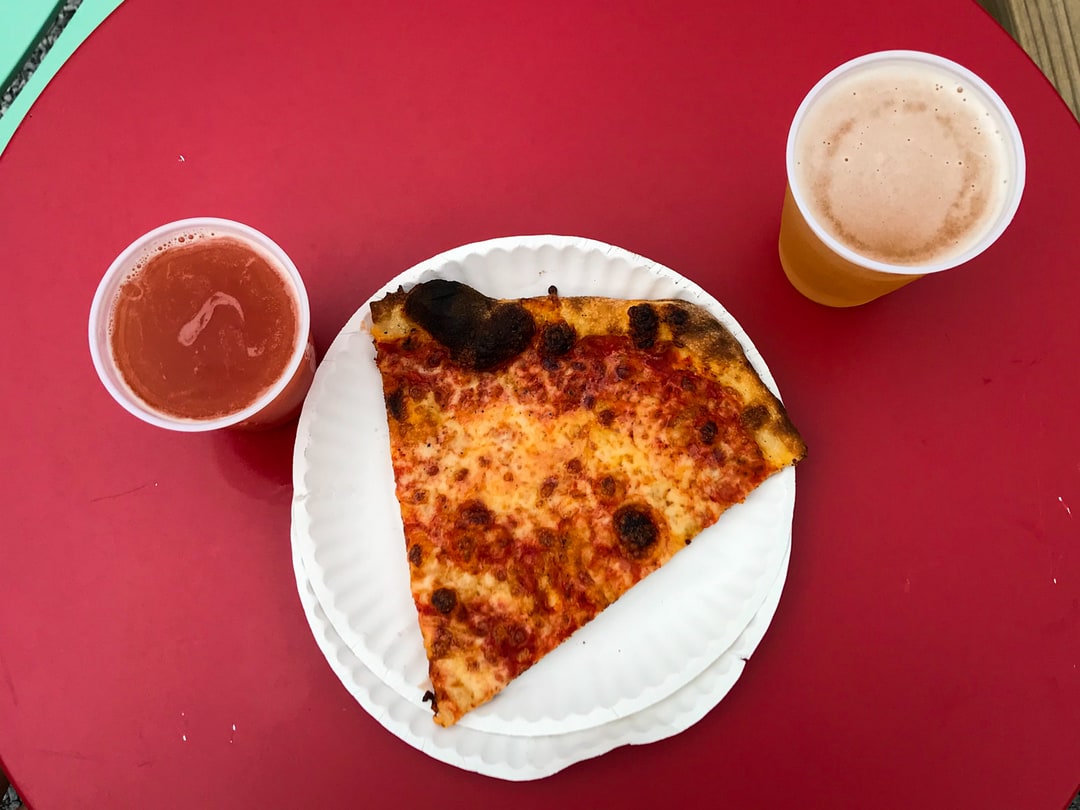 Zander White (the “Zee” in Zee’s Pizzeria) is originally from Maine and grew up on his dad’s “Northeastern style” pizza: pies with a thin, chewy crust and the perfect amount of char. As he perfected his own recipe for fun over the past decade or so, his backyard pizza parties became a thing of legend amongst friends. Though he’d built a career in the camera department of projects in New Orleans’ thriving film scene, this came to a grinding halt in March 2020 like so many industries and Zee saw an opportunity to shift gears (and ultimately get more family time— he has a two-year-old).

He began popping up at Zony Mash in July 2020 and was able to really level up his business when the trailer and oven were brought over from the old Mellow Mushroom in September. When his final film production wraps in mid-March this will become his full-time gig: he’ll take over the Thursday night slot in addition to his regular Saturday night slot, and he hopes to open a brick-and-mortar by the end of the year. Pre-order full pies online or on Instagram, or come through for a slice while they last. 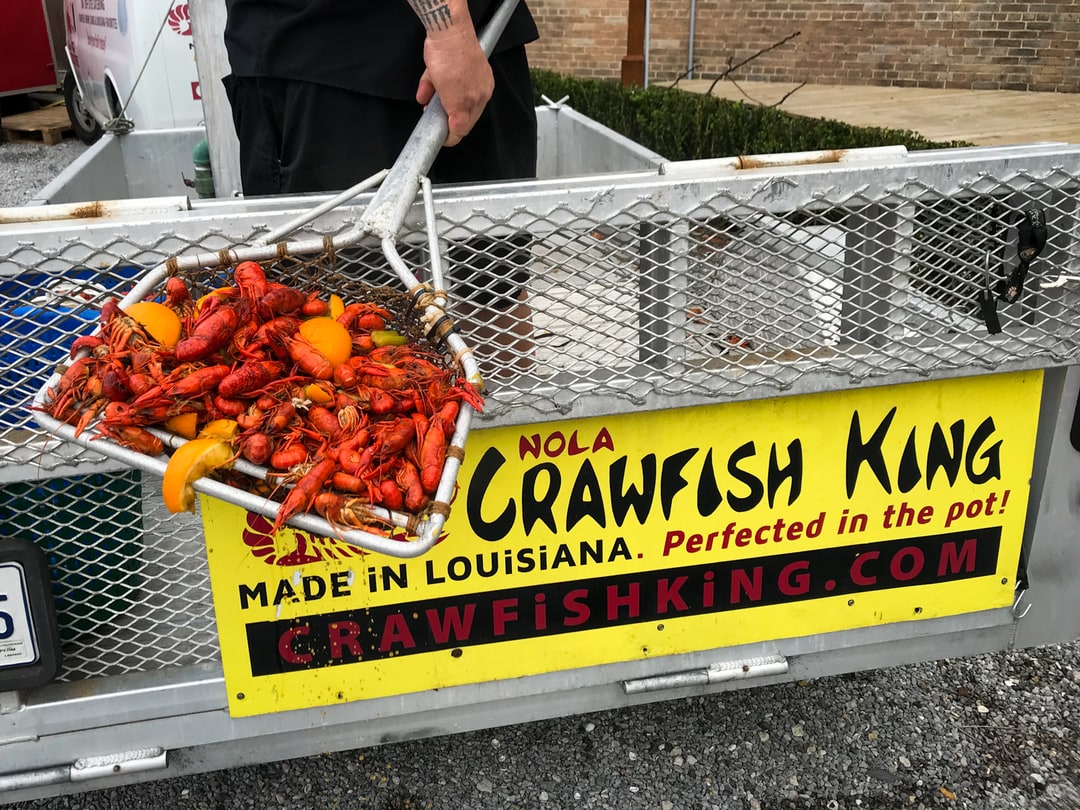 NOLA Crawfish King is the outlier in the pop-up bunch in that they have been doing their thing for over two decades! They’re excited to have recently opened a brick-and-mortar in Gentilly, but love the opportunity to connect with new clientele in their Saturday afternoon slot at Zony Mash. You can get your perfectly boiled crawfish in a 3-, 5-, or 10-pound order, and of course there are the usual fixins like corn, potatoes, and sausage to be added on.

If you haven’t had the chicken sandwich from Southerns yet, you really owe it to yourself to get on it. Anthony Cruz and his partner Gene Colley came on the scene hot in 2019 when they, as a bunch of no-names, snagged the top prize at Fried Chicken Fest, and went on to take the Best Chicken Po-Boy title at that year’s Po-Boy Fest (OMG REMEMBER FESTS, Y’ALL?!).

You could be forgiven for being unfamiliar with “Detroit-style pizza” in this world where New York and Chicago have reigned supreme for so long, but Jack DaVia is here to make sure New Orleanians know what’s up. His pies are the Sicilian-inspired rectangular pan pizzas he grew up on, and his goal is to deliver three amazing textures in every bite: a crunch at the bottom, where the dough has basically fried in the pan; a pillowy center; and a chewy-but-crispy edge.

He’s come a long way from what felt like a disastrous opening pop-up at Manolito in July 2020 (he was almost instantly overwhelmed with orders, but the reception was good!). He credits this largely to what he calls Zony Mash’ ‘incubator-style’ operation that has allowed all these new businesses to get on their feet in these unprecedented times. They serve whole pies only at this point, and strongly recommend ordering ahead after 1 p.m. on Mondays (walk-ups are welcome, but patrons should be prepared to wait up to 45 minutes). Jack’s personal favorite is the ABSOLUTELY BONKERS-SOUNDING spaghetti-and-meatballs pizza but I respect a visionary and can’t wait to give it a try.

Colleen Allterton and Camille Staub, the ladies behind Luncheon, like to say they had a jump-start into the pandemic-era madness. They received a holiday surprise to round out 2019 with the news that Made Grocery, the little market they ran together, was closing. They’re both professionally trained chefs who’d already built successful careers and knew they worked well together; they realized they had all the tools they needed to start something of their own. They decided to start a little catering company called Luncheon that instantly showed promise. THEN the pandemic hit.

But Zony Mash has afforded Luncheon the opportunity to share their skills and build their brand as well. On two different nights per week you can check out their rotating lineup of thoughtful, delicious goodies; from wings, to cookies, to duck fat fries, to a VEGAN boudin they say has really changed some minds on the viability of vegan boudin. Their personal favorite? Schnitzel. “If we had it our way, every meal would have a schnitzel course.”