Ok, we know, it’s in an alley. And usually, this would sound weird, but trust us, it’s worth it.

Take a stroll or drive down Rampart Street in the Bywater on the right day of the week, and you just might spot a socially distanced line of people waiting to head down a pleasantly shaded path between Piety and Desire streets. 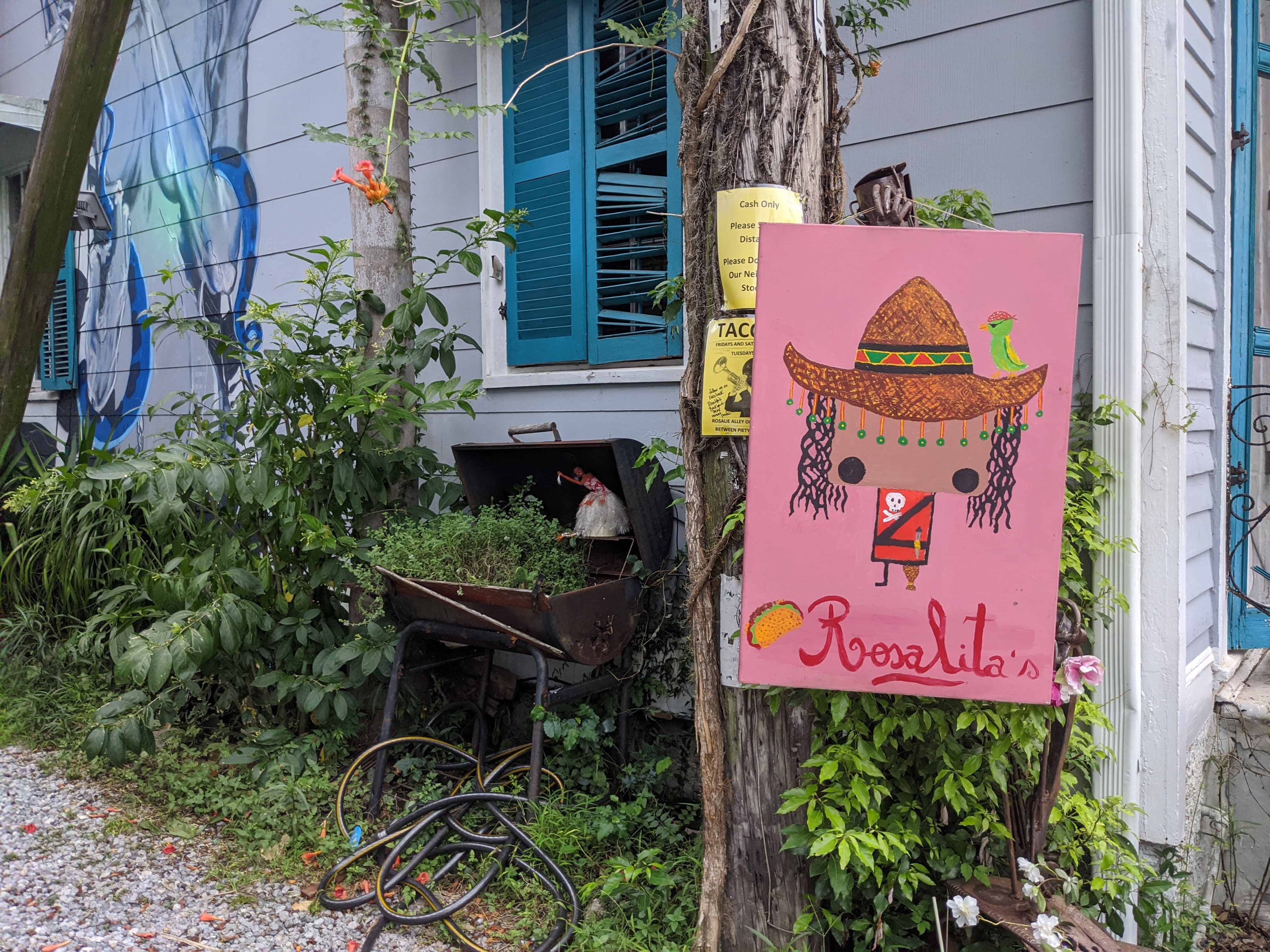 If it’s a Tuesday, Friday or Saturday evening, you can mask up and follow them to Rosalita’s Backyard Tacos, a popup-style food stand that’s been navigating pandemic-era protocols to bring food like tacos, burritos, nachos and tostadas to the neighborhood and beyond. Catering to a crowd that ranges from young professionals to families to New Orleans police officers, Rosalita’s has attracted a loyal audience seemingly based largely on word of mouth and social media.

Walk up to a window through a fence decorated with a kind of California vibe–chef Ian Schnoebelen hails from San Diego, after all–and take a look at the day’s specials before you pick your meal. Find a spot to sit or stand in the alley or literal backyard, and wait for your order to be called. 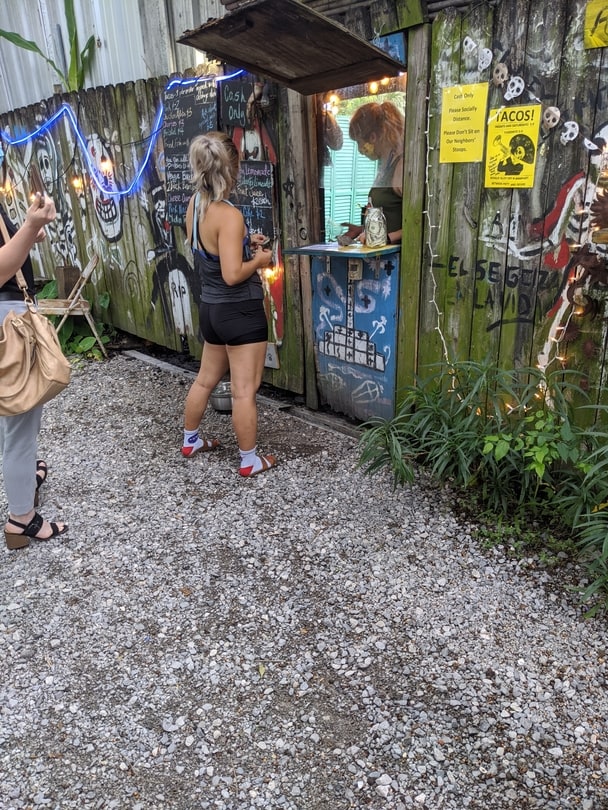 There are a few nicely shady spots to sit and enjoy your meal separated from other diners, and many take their food to go. Signs ask that you refrain from dining on the neighbors’ steps (though, if you live in the neighborhood, nobody can stop you from munching on your own stoop or porch). Personally, I grabbed an alley table and had three tacos, made with pleasantly spicy house-made chorizo, adobo-style chicken and a portion of brisket generous enough that I ate some with a fork before biting into the taco. 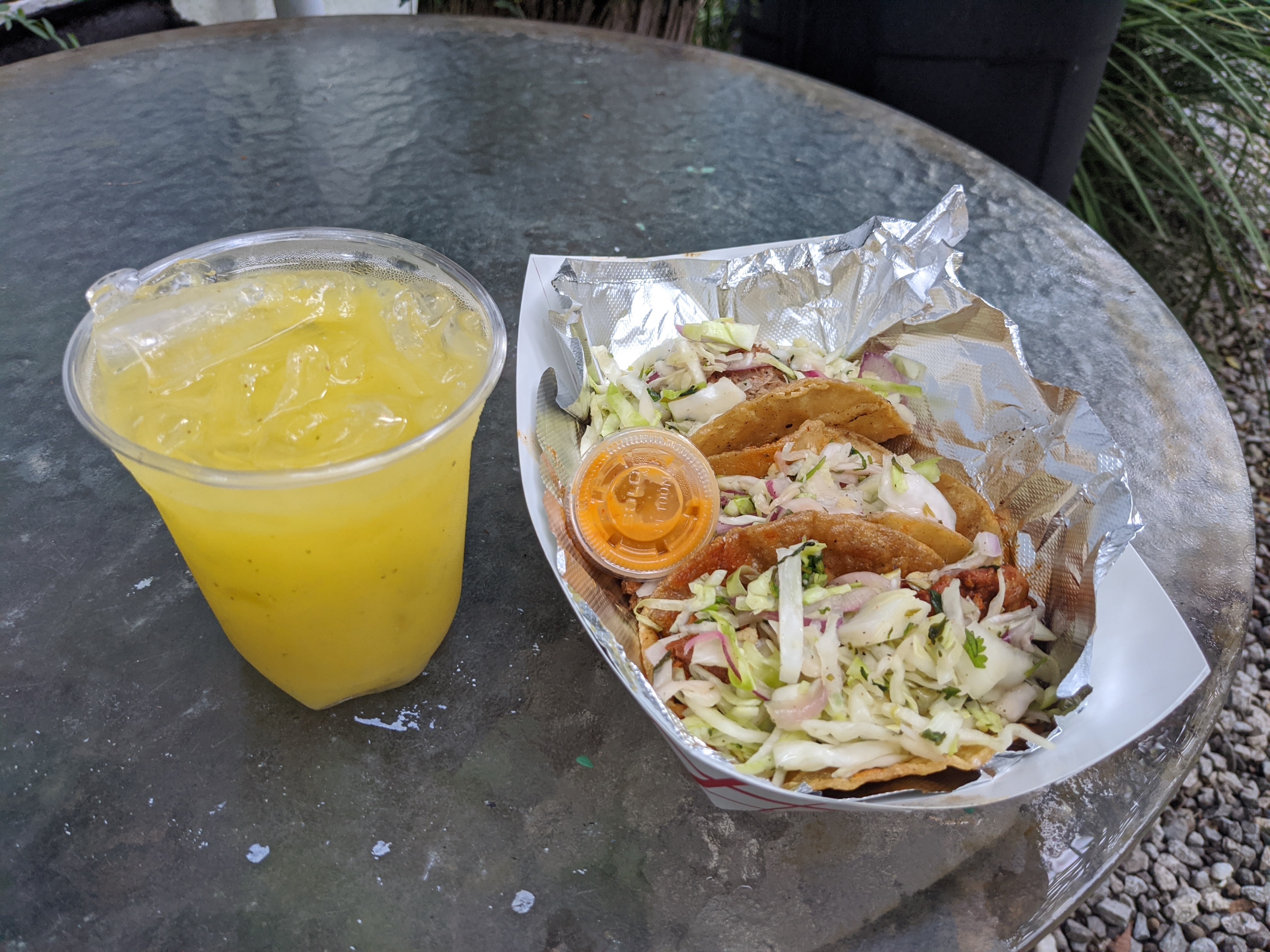 Drinks include a tasty pineapple cilantro limeade and other house-made juice beverages. Other options include Mexican Coke (made with real cane sugar), bottled water and trendy La Croix seltzer.

Being in a backyard isn’t for beginners

Rosalita’s, which takes its name from Rosalie Alley, the official name of its mini street, has been open for about two and a half years, said co-owner Laurie Casebonne, who is married to Schnoebelen. The couple previously owned other highly regarded New Orleans restaurants, including French Quarter bistro Iris and the Bywater Italian spot Mariza.

“We were going to figure out what we were going to do next, and we kind of came up with this idea to do a little pop-up in our backyard,” said Casebonne.

They don’t claim to offer “authentic Mexican food,” she said, and aren’t aiming for “fancy, expensive tacos,” either. The food is similar to what they cook for themselves, but that’s not to say that they don’t put in a lot of effort.

“My husband smokes the pork and the brisket for hours, and then braises it for another eight hours with different vegetables and spices,” said Casebonne. He also makes his own chorizo from ground pork and a blend of spice, and Casebonne makes each of the juice drinks from fresh fruit based on what looks good at local vendors.

“If I’m driving to Chalmette to run errands, and I see the watermelon truck has yellow watermelons, and I always stop and get them,” she said.

It’s not out of the question that the restaurant could move into a more traditional space in the future, she said. But it’s also been on the vanguard of a movement toward pop-up spots in the Bywater and Marigny that seems to have picked up momentum during the coronavirus pandemic, as diners flock to neighborhood locations offering simple food to go, like the ice pops around the corner from Rosalita’s behind the Popsicle Doorbell or the namesake frozen treats at Chance in Hell Snoballs.

MORE: Your fresh, hip cousin’s house: a day in the Bywater

“I think the trend is definitely moving toward more casual food,” Casebonne said, “obviously outdoor, in light of what we’re going through.”

If you’re planning on heading to Rosalita’s, check the Facebook page for specials, hours and other information. That’s where they post messages about storm closures or pandemic-related changes to the payment and ordering procedure. And if you’re pondering starting a pop-up of your own, consider following the Rosalita’s team’s lead and setting up in a location as intriguing as your meals.

“That’s one of the reasons we thought this would be cool: it’s in an alley,” said Casebonne. “If you bring someone there, you seem cool, right?”