Magnolia Yoga is New Orleans’ first black-owned yoga studio, located on recently revitalized Basin Street, next door to Backatown Coffee Shop. Health educator, advocate and studio owner Adrianne “Ajax” Jackson was in search of a space to open a yoga studio in New Orleans. She settled on the spot on Basin Street, which has always played an important role in local history — especially when it comes to black female entrepreneurship.

In the late 1800s, the area was known as Storyville, New Orleans’ red light district where prostitution and drugs were tolerated and regulated. The unlawful activities that took place in Storyville and the jazz music that filled the brothels attracted visitors from all over the country and generated millions of dollars in economic activity. Though segregated, black female entrepreneurship existed within Storyville with Lulu White, a black-Creole woman who rose to prominence with her popular brothel and bar, Mahogany Hall and Lulu White’s Saloon. Decades later, Storyville was torn down and the Iberville Projects were built in its place as an all-white development for military families. By the 2000s, the residents of the Iberville Projects were predominately black, with many driven into extreme poverty. After Hurricane Katrina, the Iberville Projects was redeveloped as mixed-income apartments. Though Basin Street has drastically changed over time, its transformation toward black ownership and healing represents a hopeful future — and since 2016 Magnolia Yoga has been a part of that renaissance.

In nearly three years, it has become a community haven where locals practice yoga and elevate their minds, bodies, and spirits. In addition, Magnolia Yoga offers a more unique experience than that of your typical yoga class with #MusicMondays composed of your favorite playlists and artists and recently, #WuTangWednesdays that pay homage to the legendary hip-hop group.

Magnolia Yoga is unique in its use of hot yoga, which naturally speeds up the healing properties of yoga through a heated environment.

“People need results and have a lot to do. They don’t have a lot of time, so having something that gives quick results is attractive,” said Jackson.

With trauma and illnesses that plague black and brown communities specifically, Jackson explains that hot yoga is especially beneficial to these communities.

“Some people are just in toxic environments — work, school, home, their neighborhood,” she said. “Yoga can change your life, but it’s one of those things that’s a slow, steady build to change.” 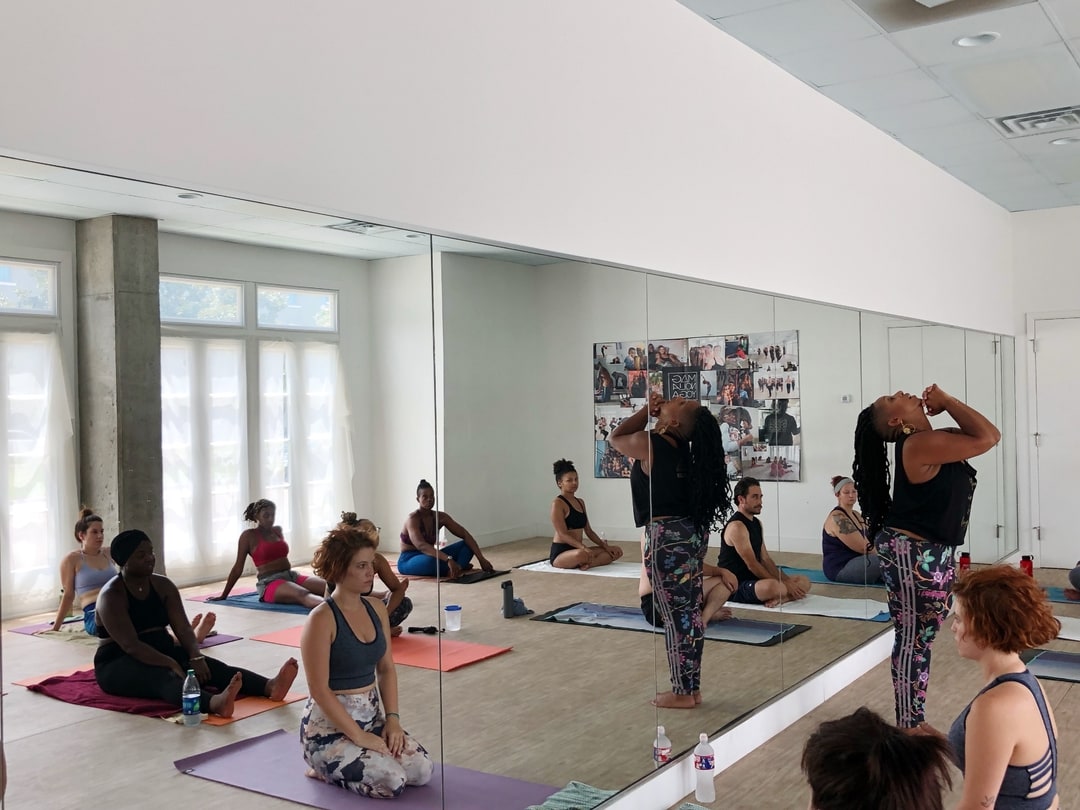 Jackson praises the health commitment from locals, who may start out only taking two or three classes or dive right in with monthly memberships. Easing into regular yoga practices has a long list of health benefits, from building consistency, focus, and making better choices; to helping alleviate daily stresses that are harmful to our body and immune system.

“Just simply removing the stress from people’s lives reduces the odds of them getting sick, the odds of aging faster,” said Jackson. At Magnolia Yoga, “You get your mind and body right so you can go out there and do your life’s work.”

Jackson and Magnolia Yoga Studio are in line with the ongoing history of Basin Street, healing in a site once traumatic to some and continuing the legacy of black female entrepreneurship from the era of Storyville.