Dirty Funq’s murals have been popping up all around town these past several months. He enjoys collaborating, more than needing to be front and center, so if you see some graffiti writing that says “Love” or a piece by Mr. Balloon Hands, keep your eyes open: there’s likely artwork by Dirty Funq nearby.

“I love collabing. The mural I just did with Mr. Balloonhands and Zac Maras got great feedback from the neighborhood and [positive] coverage. It was a big mural, so the way we were all able to mesh our styles and come up with a composition that worked evenly, where we were all doing a pretty equal part was very cool.”

The person Dirty Funq enjoys collabing with the most, luckily, is the person he enjoys being around the most, the extraordinarily talented tattoo artist, Danika Brooke, a.k.a. feliine.

I had the pleasure of getting to spend time with the two of them and their white cat, Loki, in their artist loft that’s already filling to the brim with colorful, intricate works done by both of them and by the artists they admire. 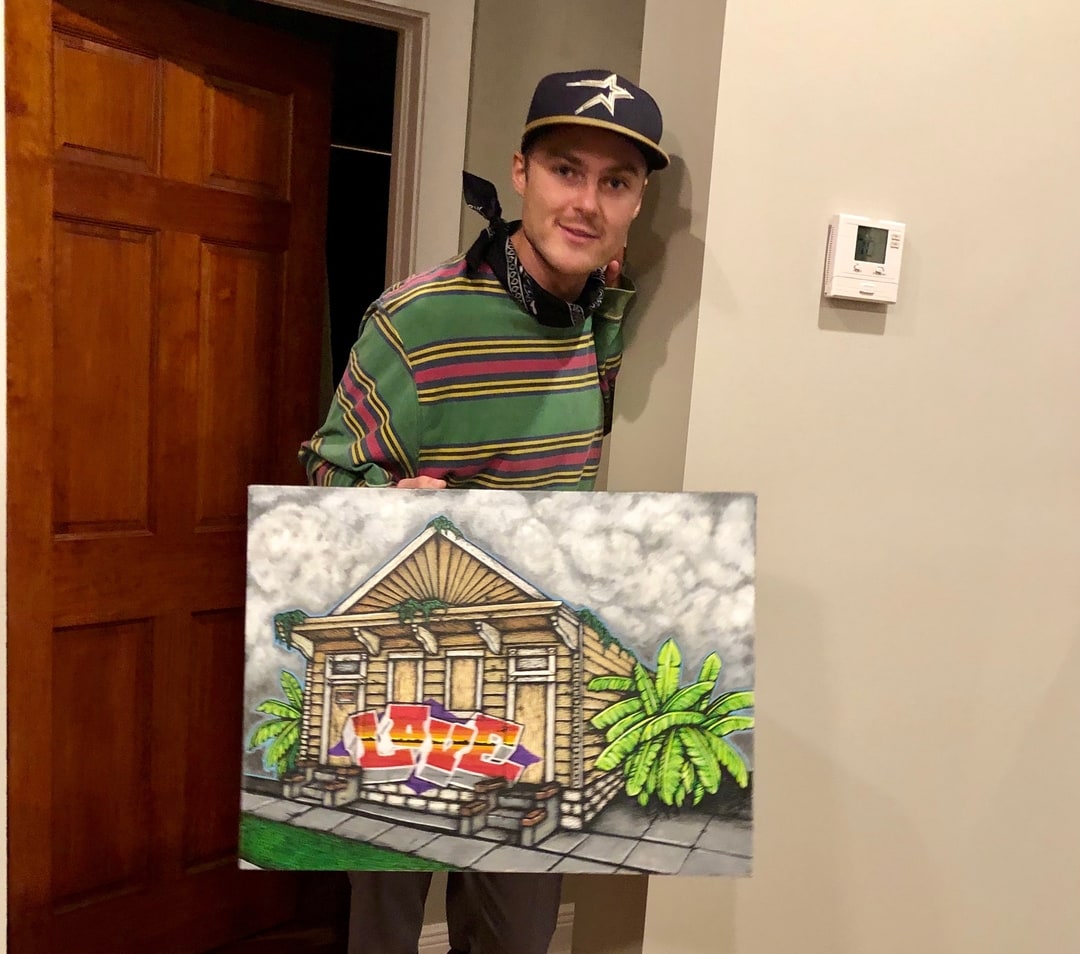 Looking around, there’s no doubt that they’re based in New Orleans.

“I draw inspiration from the music here,” Dirty Funq said, pointing to a painting he’s done of The Meters.

It’s not just the music, he explained.

“The architecture is cool. I’ve painted many shotguns– the moss, the vines, the cat’s claw growing on the houses — decaying but growing and living at the same time,” he said. “I’m fascinated by the life and death of such a harsh climate, the vibrancy of it all.” 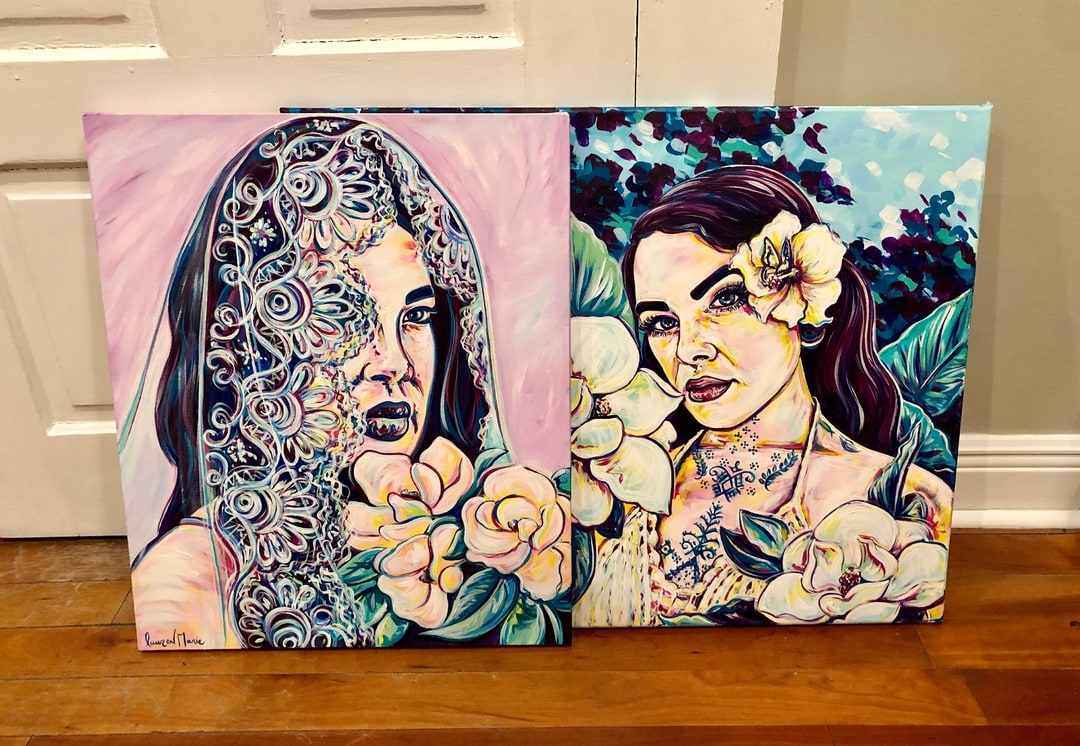 Beside Danika are several paintings of Danika that, I learn, have been done by an artist friend of theirs.

“Lauren Marie, she’s an amazing local painter,” she explained. “She paints all New Orleans style houses, architecture, people, places. She’s painted me twice. I tattooed an ornamental cuff on her with a tarot card. I tweaked the card to have a crawfish on it with some swampy vibes. When I tattoo in LA it’s completely different than when I tattoo in New Orleans. When I travel, people are into different types of things. When I moved here, I started tattooing Louisiana plants and foliage and architecture. I’m super inspired by the wrought iron. I love it so much. People ask for local designs because they’re proud to be from here. I feel that I channel a lot of that through my tattoo style now.”

Dirty Funq grew up in New Orleans and then bounced around the U.S. before returning to make his life here about three years ago.

“I never really planned to leave L.A. I was content there but my mom was coming down here regularly for Saints games ‘cause she’s a big Saints fan. She would always tell me about this city and how much I’d love it. So, one year I went with her.” Danika explains. “From the minute I got off the airplane and smelt the mildew, I was like ‘I’m not in L.A. anymore. This is different.’ The houses, the architecture. I was so drawn to it. I was sucked in right away. Whenever I’d go back to California, I would cry thinking about New Orleans and how I wanted to be back here so bad. This place drew me in. I had to be here. It wasn’t really a choice. I’d booked Airbnbs for a month at a time, a couple of times. I was so happy walking the streets here, taking it all in. Then I got a guest spot at Tattoo Temple in Mid City, which turned into a job, and I’ve been here since.” 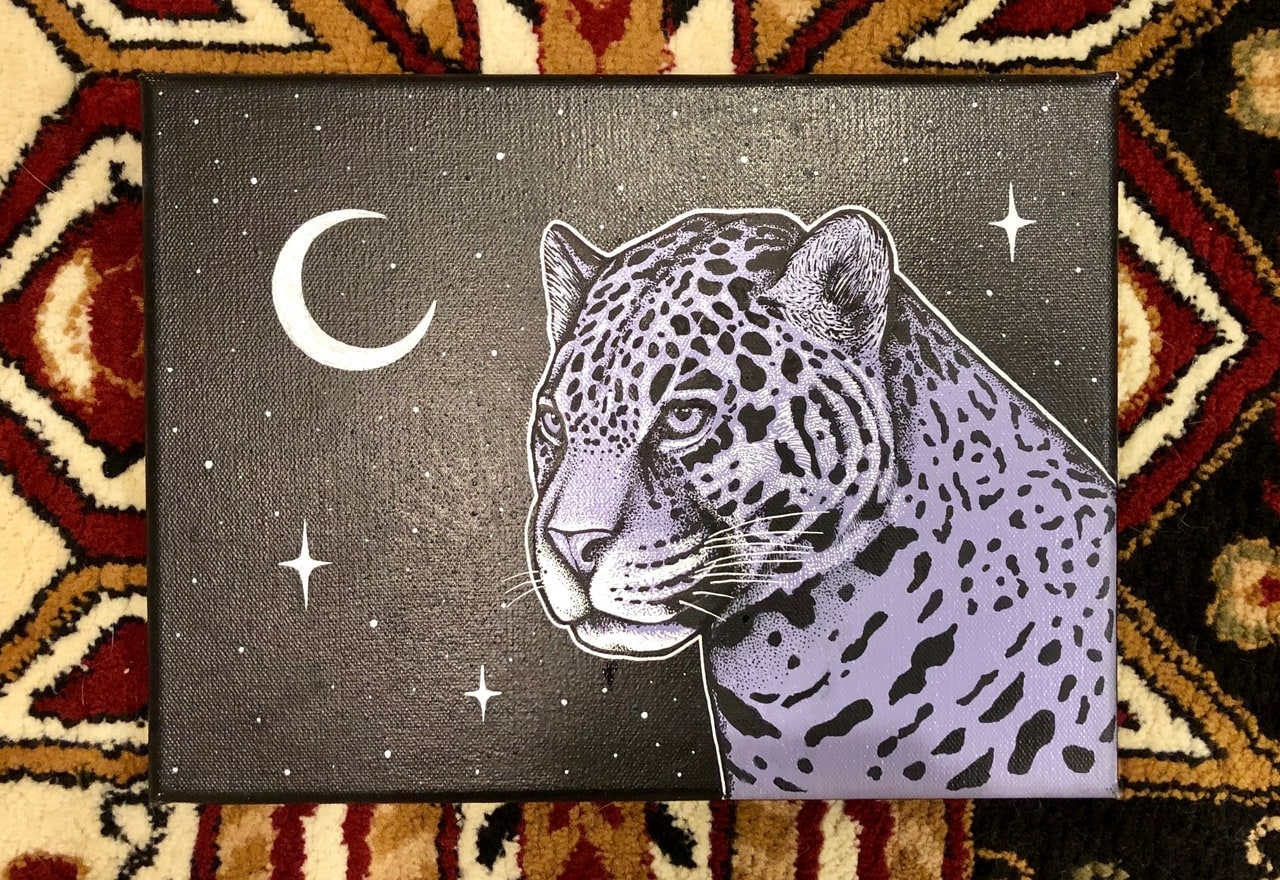 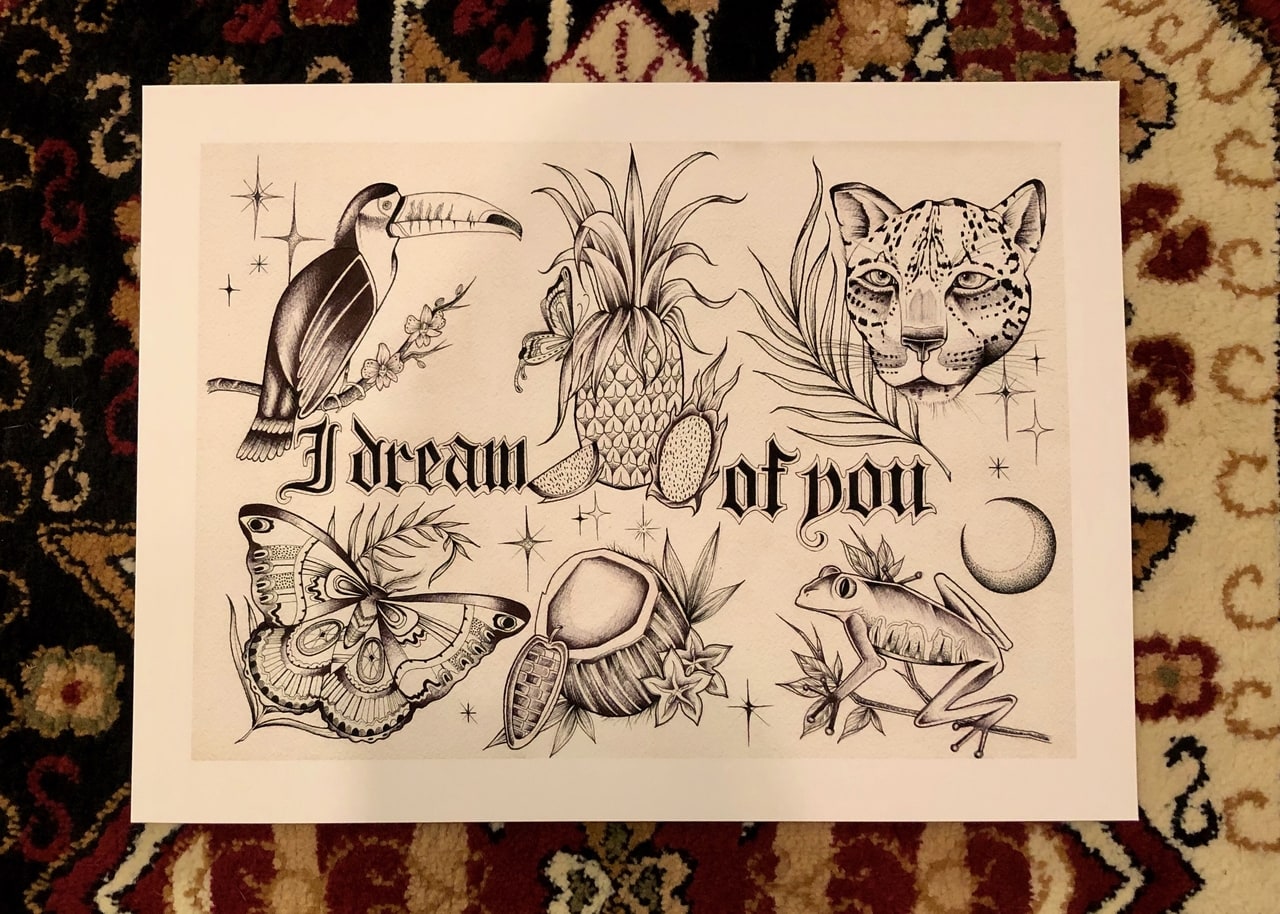 Dirty Funq and feliine’s collaborations and overlap have been a strong theme of their relationship.

“Right when we first met, Danika was doing an all-female art showcase at the Contemporary Arts Center and she needed a model to get tattooed live. I think we’d known each other for maybe a few weeks at that point. This was the second one she did on me,” he says, rolling up his sleeve. “Then there’ve been a bunch of quarantine tattoos: this little bee and this big jaguar. I’ve gone from two to seven, since I’ve known her. My artwork looks a lot like flash sheets, so once I got started, I picture this going here and the next one goes here.”

The jaguar tattoo is likely a reference to the short, inventive stop-motion music video they did to the Maddie Ruthless song, Jaguar Queen.

“Every time she makes clothes, we do a photoshoot.  I don’t think we even planned on making a video that day, we were just listening to the song and doing a photoshoot and midway through taking hundreds of photos, I thought, ‘I want to make a stop motion animation out of this,’” says Dirty Funq.

“We have so much fun together. He helps me so much. Before I met him, It was a struggle to figure out how I was going to get pictures of all the stuff I make,” Danika says. 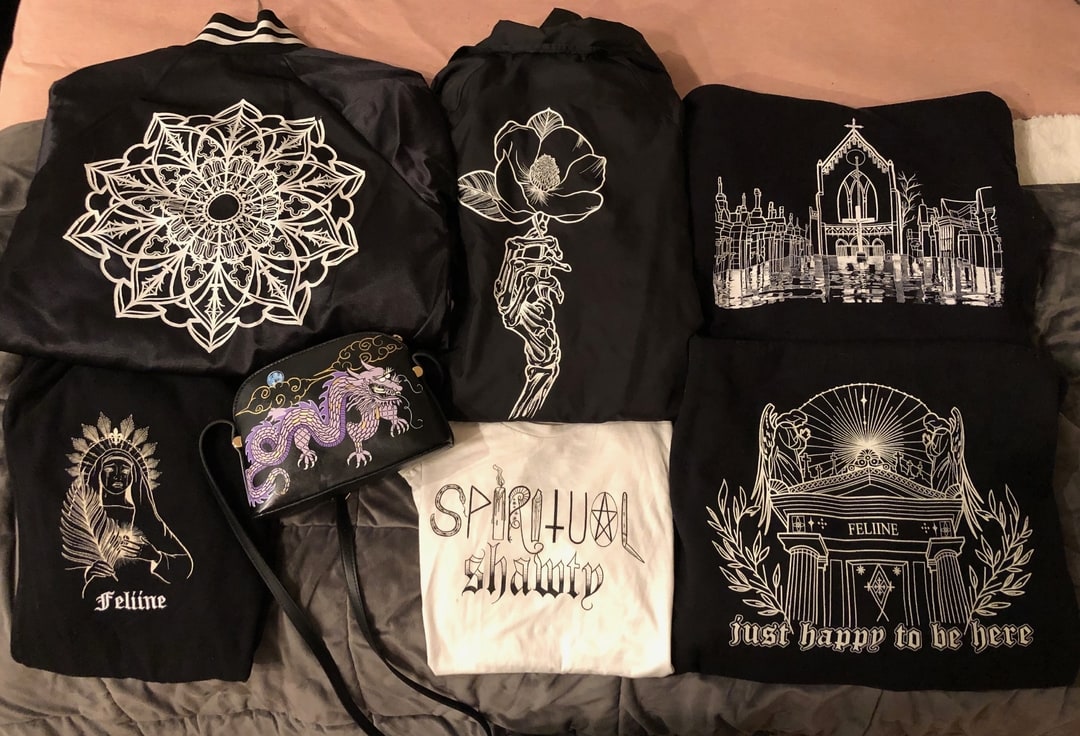 This leads to a show-and-tell of the feliine hand-painted purses and custom screen printed clothing line.

“I’m gonna take my stuff to the next level and do more customized things. I want to add hand made elements to each piece. I used to sew when I was younger– my grandma taught me and I just ordered a sewing machine to start again. Tattooing is really draining: mentally, physically and emotionally. I love fashion and I really enjoy painting on inanimate objects sometimes, instead of real people.

“I’ve started working with oils during quarantine and he’s learning how to tattoo,” said Danika.

“She’s really good with the micron pens,” he added. “The ballpoint pens are the things that I enjoy using the most [though] my paintings are generally made with acrylic paint and acrylic paint marker. People call my style cartoony because of the thick black lines [from the paint marker]. It’s not super realistic looking but it actually is accurate to the anatomy and architecture of the subject.”

The moment quarantine is over, Dirty Funq and Danika hope to be traveling.

“We dream about getting a van and going around and being on the road. I want to tattoo everywhere,” she said. 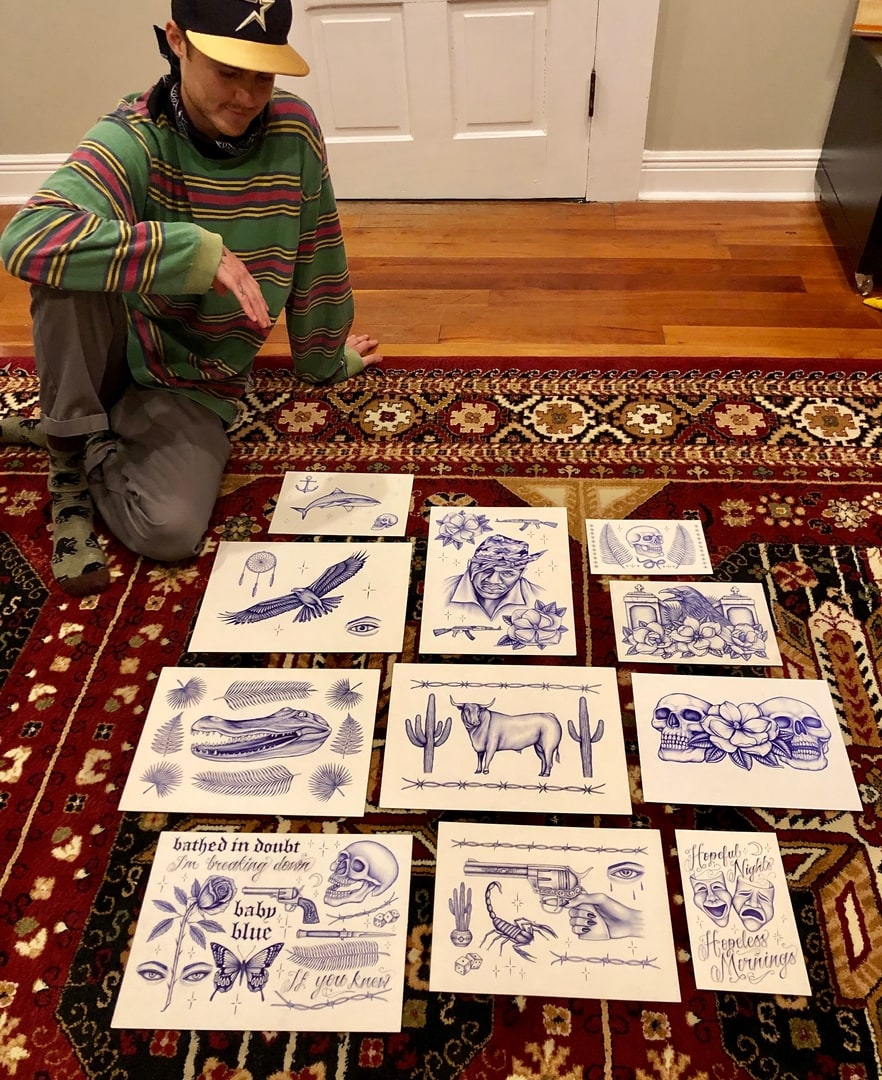 “I’d like to paint out west somewhere: Albuquerque, (Los Angeles), Seattle… internationally, I’d paint anywhere, really. I just did a mural down the street from my childhood home, where my mom lives, right across from my high school. I feel like it would be cool to paint in smaller towns like that that don’t have all that much art. One of the things that was so cool about doing a proper mural in my hometime is that there was nothing my style there. Small, random towns would be sick for doing art,” said Dirty Funq.

Asking about artists they admire opens up a whole deluge of answers.

“I’ve always looked up to Pauly Lingerfelt at Downtown Tattoo” says Danika. “I researched local artists before I moved here and his stuff really stood out to me, so I had him do this cuff on my left hand and then several others since then. I love him as a person and I love his artwork. I’ve tattooed him too. He’s covered and we had to scrounge for a spot on him, so it was something small.” 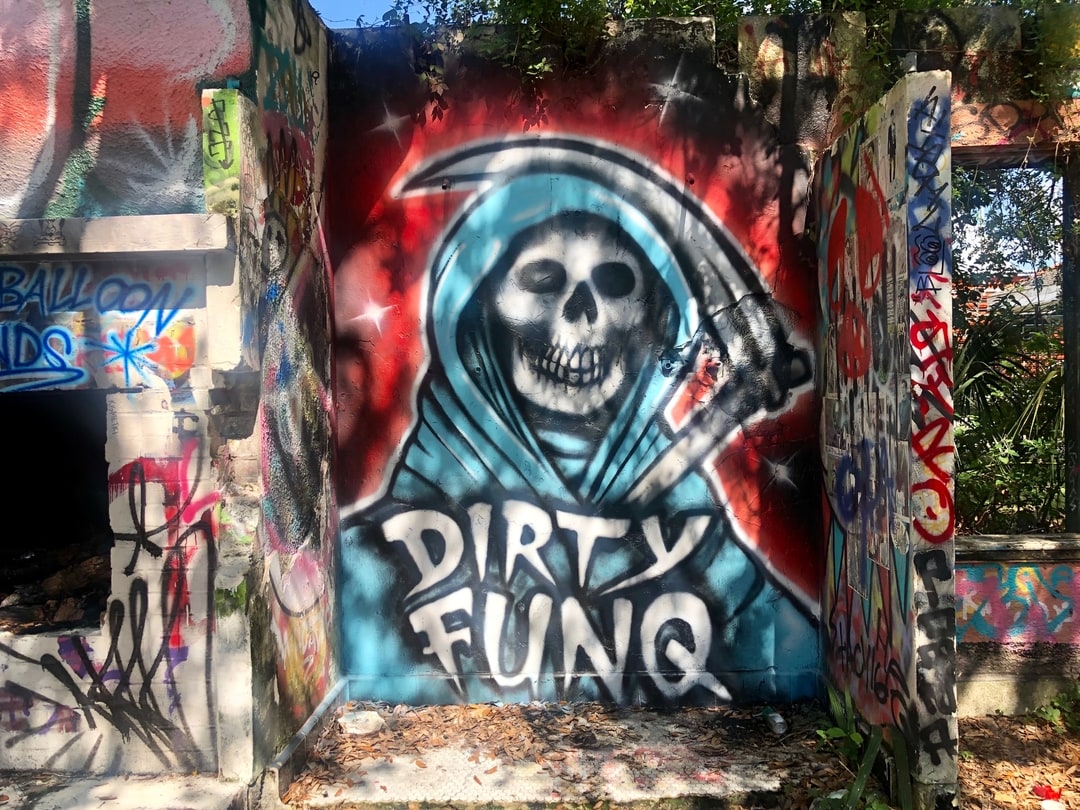 “It’s really cool becoming friends with Mr. Balloon Hands and Zac Maras because before I moved back here I saw their work and loved their styles. Those two are the homies,” says Dirty Funq. “Uter is one of my favorite graffiti writers. He does mural-based graffiti with a lot of characters, his style is very raw and loose but detailed. He’s in a crew with this guy Devote, he’s painted at Voodoo and done all sorts of crazy stuff. He’s super dope. Obviously, Hugo Gyrl, Reader, Old Crow. New Orleans is such a graffiti city. There’s so many world class artists here. The per capita skills exceed anywhere I can think of. Maybe I’m biased and haven’t been to every city but the amount of musicians, visual artists, photographers, and dancers here. It’s not like anywhere else.” 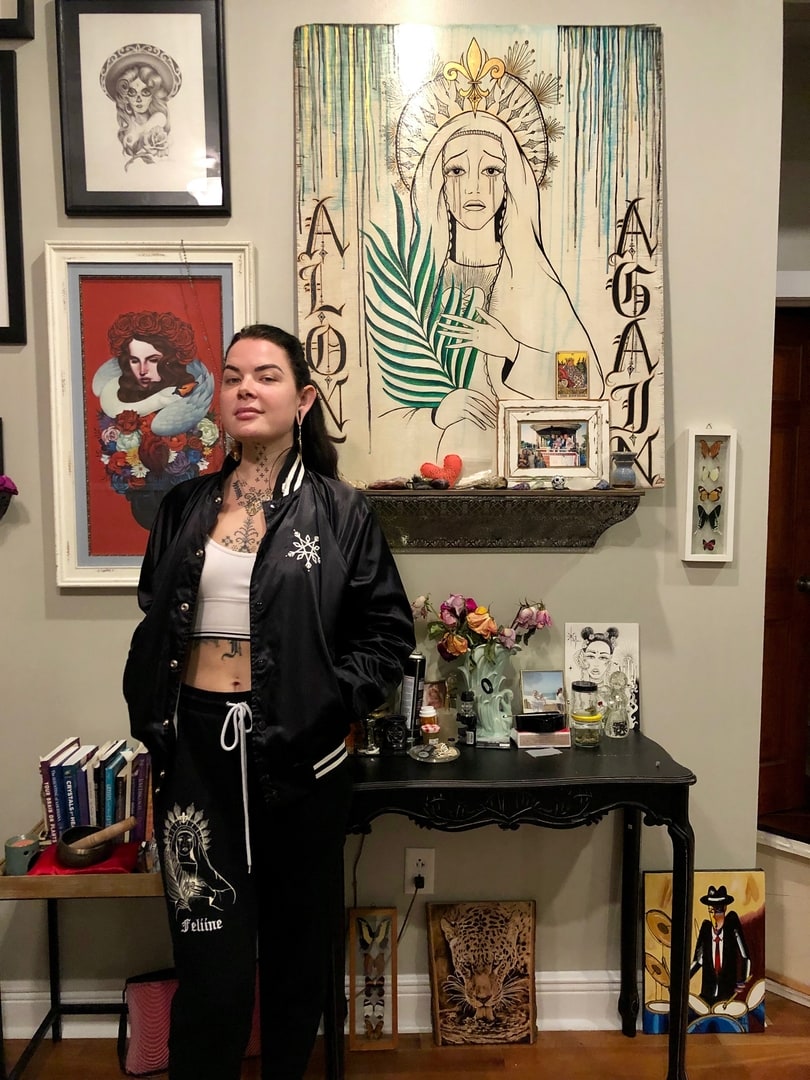 “Lauren Marie, of course” Danika adds. “She’s from Lake Charles, lives in New Orleans now. She’s a homebody cat lady like me. She developed her style from working at Painting With a Twist and learned to whip up a masterpiece quick. She paints very loosely. Me, I paint very tight, getting all the little details and crevices. She can paint a landscape in a day. She would conduct these classes where they had to finish a painting in an hour, so she learned how to paint in that style. Natasha Schmidt at Tattoo Temple is a great tattoo artist. She got me started here. I worked with her for years.”

“I feel really inspired here, ” Danika continues. “I never wanted to paint when I was in LA. I never even felt compelled. But when I’m in New Orleans, I feel creative. It’s just a vibe. I want to do it all.” 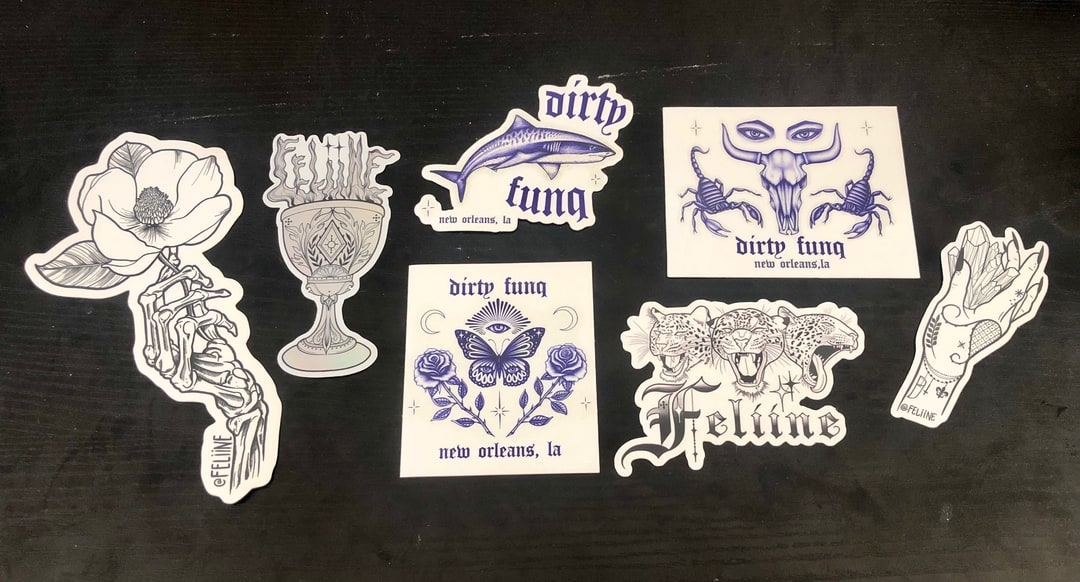